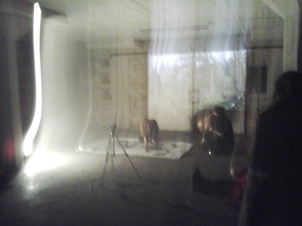 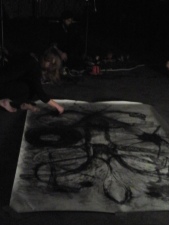 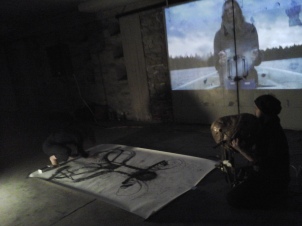 Völuspá is a boundary-dissolving ritual performance based on interconnecting trance-work between music and visual art. It explores occulture as a cultural current and a framework that can contextualize personal mythology and spiritual work in a postmodern world.

The drumming uses three or sometimes four types of ritual drums. The shaman drum is the core drum, and a vessel for spiritual travelling and vision journeying. In our practice it is referred to as the boat: it is the originating pulse of creation as a cosmic dance. The cajon is a box drum from Peru that is used in afro-Peruvian music traditions. For the cajon we use the term “horse”, as it creates the riding rhythm focusing the trance work. It also gives structure to the process of manifestation. The third drum is the balinese kendang, which is traditionally used in the ceremonial music gambelan. We call this drum the lizard or two-headed serpent, for it climbs and hunts around the sound texture to create vortexes that make the creation (and dissolving) work possible. Being a double-headed drum, it also manifests the union of the opposing principles in the ritual.

The rhythmic patterns used in the trance-work are based on the styles that these drums are traditionally played, as well as on sacred geometry and the visionary shapes connected to the alchemical process of transformation through dissolving the boundaries between archetypal opposites. In esoteric traditions this ritual is generally called the great rite, or Hieros Gamos.

The drawing is made in trance created by the drumming and bodily work. It appears on a large white paper laid to cover the floor or ground, depending on where the ritual performance is done.

The act or event of drawing is essentially a trance-dance resulting in shapes and forms on paper, a vision of unity created by something beyond the frame of the ritual itself. It is a channelling.

The material we use in drawing is charcoal. It is not widely used as a medium in occult and esoteric art, but the transformation through fire makes it a natural choice for us. Charcoal binds inside it the spirit of fire that is raised through the agitation of archaic rhythm and sexual energy. Harnessing and directing the spirit of fire makes it possible to connect to ancient memory and knowledge of the cosmos that consequently in trance appears on paper as occult constellations of shapes and symbols hidden and revealed by intertwining snakes, roots and threads. Thus the emerging images create each time a new doorway to move through.

Reading these drawings is like interpreting Tarot and therefore we understand charcoal as a Seer (Völva). Adversely to divination as we has learned to understand it we don’t interpret our drawings but leave them open for different readings.